An Italian amateur astronomer planed and built an  astronomical observatory that has been especially conceived to be completely remote controlled. Let’s know it better! 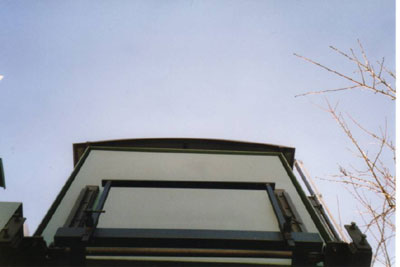 The Dho’s Observatory is located in Chiusa di Pesio, a little town very close to the Maritime Alps in North Italy.

The main structure of the observatory consists of a lower part of reinforced concrete that has the purpose of hosting the electrical switchboard and supporting the upper dome.

The dimension of the dome is reduced as much as possible, since the observatory has been conceived to be completely remote controlled. Thus, there is no need of an operator in the shelter, except for periodical cleaning and maintenance routine.

The main scope is a 12” Schmidt-Cassegrain mounted on a Meade Superwedge, that has been deeply modified by the author in order to increase its strength.

The idea of building a remote controlled amateur astronomical observatory dates back to several years and rose from the need to make the maximum use of the very little free time available.

The possibility of an almost complete automation allows the astroimager to drastically reduce idle time and to scan, check up and elaborate the astronomical images that were previously taken while the CCD camera performs new exposures.

Besides, the robotization speeds up the research of supernovae, comets and asteroids and increases the possibility of discovering new objects.

For years the author performed a series of tests and modifications that allowed a better operation and practicality of the whole facility.

Now, that his astronomical observatory is practically ready, he can both control it directly from long distances and program imaging sessions automatically at his own pleasure. For the imaging sessions a series of hardware and software work together to control the opening and closing of the dome (based on data received from a meteorological center), and the phases of parking, unparking, pointing, centering, imaging and final storage of the images. 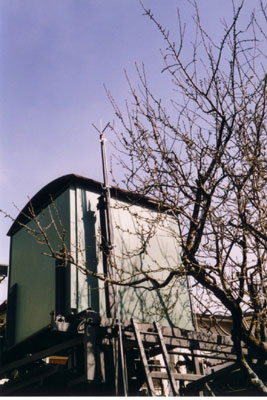 The dome system is entirely made of stainless steel and consists of a main sliding shelter over a rack rail and a folding wall.

The inner part of the structure is completely insulated and coated with wood panels. The building has got a certain mechanical oversize because the author kept in mind the local heavy snowfalls and frequent wind blasts.

The mobile parts were carefully built to avoid seepages of water either during heavy showers or snow melting in winter. A heating system also avoids blocking caused by ice sheets and concomitantly keeps internal temperature and moisture within reasonable level. It also avoids dew  that is extremely damaging to the optics and electronic parts in the dome.

The whole facility is protected against lightning through two Franklin type surge arresters.

Suitable clutches and safety devices enable the closing of the shelter even if there is a failure of the central mechanism.

An UPS management system allows an uninterruptible power supply necessary to conclude an imaging session, to park the scope and to close the dome.

In case of AC line power failures, the UPS automatically transfer the power to a battery, which powers the entire system.

The innner part of the folding wall has got a white Styrofoam board that is used to take the flat field images.

During the flat fielding operations the board is illuminated in a shadow free manner. The telescope with attached CCD camera is aimed at the board, and suitable images are taken for later use.

The dome is about 100 feet far from the control room, where the dome-PC is located.

The computer and softwares are all running Windows® 98.

PC-dome has got two parallel and three serial ports to which the astronomical devices of the observatory can be connected, such as: shelter, scope, electrical focuser, CCD camera, video camera, modem, etc. 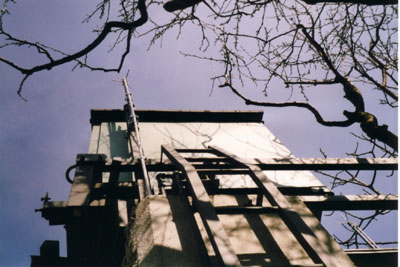 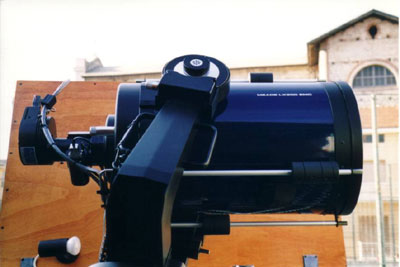 The scope in the dome is a 12” HP Meade LX200 provided with a balancing system based on four bars and sliding weights.

The scope is mounted on a Meade Superwedge duly modified and reinforced to restrict vibration and improve polar alignment operations.

The pier was made of an extremely strong mechanical tube.

To accomplish a precise polar alignment the author applied the Bigourdan’s method and then adopted the “Alignments Wizard” function of ACP ( Astronomer’s Control Panel) program, to further refine the polar alignment.

To stabilize the position of the primary mirror and so restrict its slight movements during the pointing phases of objects, a particular device that consists of a screw and a spring attachett to the mirror cell.

The focus ratio of the optical instrument, originally f/10, has been adjusted at f/3.3 through a telecompressor Optec Max-Field.

A port originally conceived to command an electrical focuser (“focuser connector”) installed on the power panel of the scope, after special modifications, controls the movements of opening and closing of the dome.

The scope is connected to the PC-dome through an RS-232 connection. 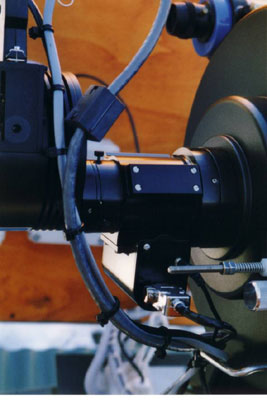 Focusing operation plays an important role for astronomical imaging. For the remote control this procedure is quite critical and requires very sophisticated and precise hardware or, at least, a focuser with digital readout  and position control.

For those who have got a Schmidt-Cassegrain, a Meade or a Celestron instrument, the simple motors added to the focus knob are not recommended, because these motors provide no remote readout and are subject to backlash and a lot of other remote operating problems.

The Schmidt-Cassegrain of the Dho’s Observatory is fitted out with a strong Crayford style motorized focuser . It is the TCF-S (Temperature Compensating Focuser) manufactured by Optec, Inc.

The TCF-S focuser provides an RS-232 serial communication that allows remote control through the PC-dome. For the physical wiring connection between the dome-PC and the TCF-S a 100 feet six-wire flat cable with RJ-12 connectors has been installed.

Once the serial connection is active, there are many commands available and it is possible to set up both mode A and mode B automatically.

For the preliminary set-up and routine controls the PROCOMM software (ftp://ftp.optecinc.com/zip/) available for free download has been used, while during the imaging sessions the CCDSoft 5.00.099 program of Software Bisque (http://www.bisque.com) has been installed.

The latter offers routine of automatic focuser called “@focus”, that are very efficient and functional.

CCDSoft and MaxIm DL CCD, support Ascom Platform and can operate with a very good software known as FocusMax. 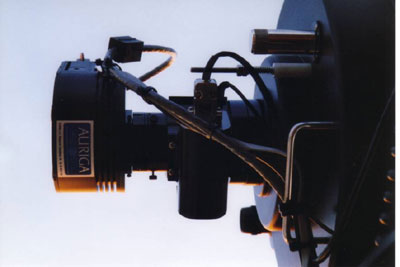 For the parallel connection between the camera and the PC-dome, a cable type Belden #8138 about 100 feet long has been used. This is a cable consisting of 8 twisted pairs of wires within a single overall shield.

Through a Tracking Interface Cable Adapter and a 6-pin telephone cable, the camera is connected to the suitable port “CCD connector” placed on the Power Panel of the telescope.

In this way the autoguide options allowed by the CCDOPS software (http://www.sbig.com)

and the CCDSoft can be utilized and long exposures can be made and guided perfectly. 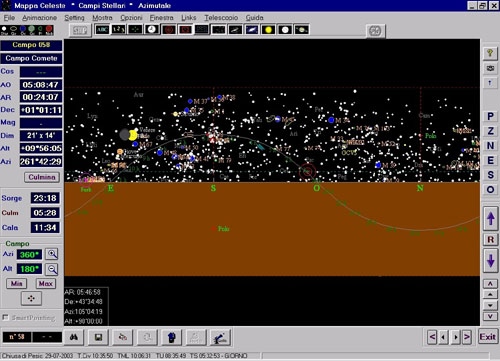 The whole system of hardware and software enables to program some automatic imaging sessions particularly aimed, such as: comet, asteroid, supernovae researches.

The applications that controls the automatic operations directly are RICERCA and ATC (http://www.omegalab-atc.com/ ), which were developed by Salvatore Massaro.

Through these programs one can set up many lists of objects to be observed. 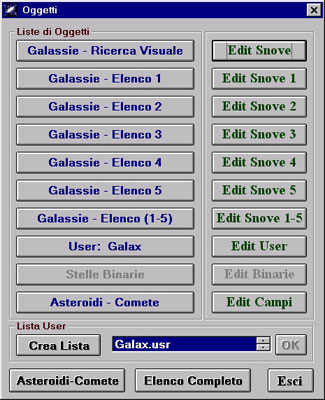 The observation order of these objects can be chosen based on different parameters, such as: sunset and culmination time, the declination, etc. 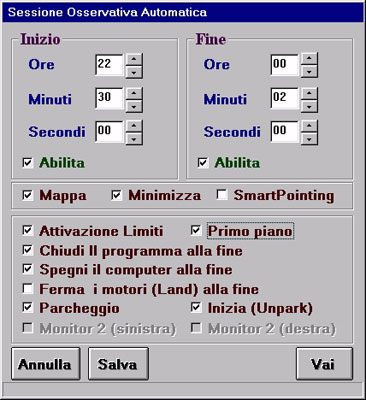 During a typical automatic imaging session, the whole facility works completely autonomous and independent, and it does not need the presence of the imager.

The basic operation phases are, as follows:

After reaching time to close the imaging session or when all the objects of the list have been taken, the session can be concluded, as follows:

During an imaging session, one can follow its development through either a remote PC or a laptop. In that way one keeps under control hardware as well as inputs complementary commands or modification of settled parameters.

The connection between PC-dome and remote PC is established through a program like Host –Client. With “Host-Client” option, one can choose among several general purposes, time tested remote control programs that offer quite high reliability, support a variety of communication system (internet, telephone, etc), contains password protection and logging, etc.

Anyway, the presence of the imager is not required during an automatic imaging session, so in most cases, the imager should only download through internet the files that were stored by the system, or take them directly from the PC-dome and transferring them to a CD-Rom, for example.

The Dho’s Observatory is equipped to the automated research of supernovae, comets and asteroids.

The control softwares ( Ricerca-ATC) offer special functions, like automatic blink, that allows highlighting, practically live, every strange or unknown object that can be identified as a new comet, a new asteroid, a supernova. To make theese functions possible there are spesial links whithin the program.

A group of amateur astronomers can follow and take part in imaging sessions through Internet. The PC-dome works as Host using the following programs, when necessary:PCAnywhere, Timbuktu Pro, Real VNC. The latter one can be freely downloaded at: http://www.uk.research.att.com/vnc/ .

Mario Dho, 40, is an Italian amateur astronomer, who lives in Chiusa di Pesio-Cuneo, in Piemonte. He researched for years the possibility to remote control his amateur astronomical observatory. He’s an industrial expert, who planed and built the Dho’s Observatory of Chiusa di Pesio. He has written many articles for Italian astronomy magazines like ”Nuovo Orione” and “Astronomia UAI”. For years he belongs to the “Unione Astrofili Italiani”. He can be contacted at the following e-mail address: dhomario@virgilio.it . 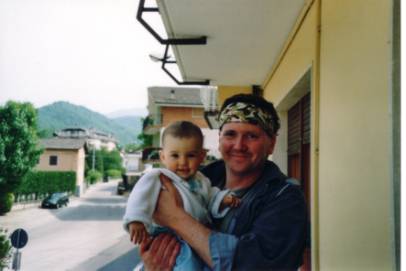 The author with his dear little cousin Maria